goBroadband broke the news live from Reliance Analyst Call on the discrepancy in Wireless Revenues reported by Company to TRAI and to the shareholders was due to the fact that telcos were booking handset revenues as part of Wireless Revenues.

The industry practice of bundling CDMA handsets with service has been falling away due to increasingly easy availability of CDMA handsets in the open market as well as sales of CDMA service through SIM-based handsets. As a result, company has stopped accounting for handset sales (which form part of packaged airtime plans) as part of the wireless segment revenues. This explains around 40% of the decline in the reported wireless revenues in 2Q – Rs40.1bn down from Rs47.9bn in 1Q.

The following chart shows the Revenue Reported by RCom to TRAI and that Reported to Shareholders. The Gap is narrowing, good for shareholders, implies increase in transparency. 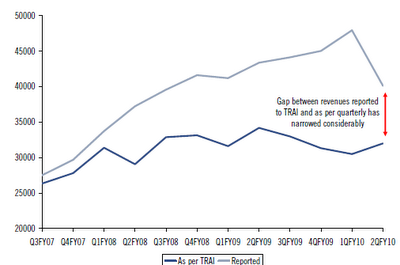