It is well known fact that Reliance Communications will start PAN India GSM Wireless operations by the end of this year. However, the major question is – Will RCom adopt a strategy to migrate all CDMA subscribers to GSM platform and eventually shut the CDMA network ? The management in several conference calls has indicated that it will continue to run both however, analysts at HSBC have a different opinion.

We see no reason why an operator would want to run dual networks for a moment longer than is absolutely necessary. Running two networks simultaneously is complex and expensive and, in our view, the sooner RCOM deals with the issue of how to migrate its subscribers from CDMA to GSM the better.

HSBC estimates how users in India will be migrated from CDMA to GSM network as shown in the graph below. 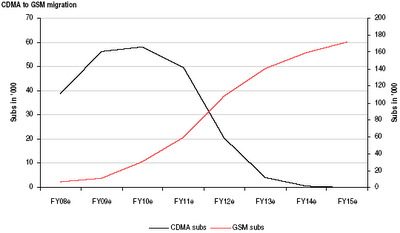 All current developments suggest that Tata another cellular operator will also migrate to GSM. HSBC report strongly suggests that CDMA networks will be closed and it is question of when and not if. Did the Jacobs of Qualcomm shoot in their feet when then IT Minister, Mr. Maran invited them for talks but the former refused to budge.