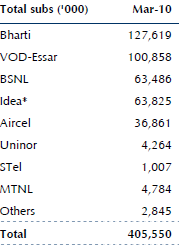 GSM players added 13.9mn subscribers in March 10 as compared to 13mn in February. We have excluded numbers for Reliance Communications & Tata Teleservices as the company reports consolidated subscribers (GSM+CDMA).

Vodafone posted the highest net additions for the second month by adding 3.6 mn subscribers. On the other hand, Idea Cellular’s net additions dropped by 30%, resulting in its net addition market share dropping by 500 bps in a single month.

Market leader Bharti maintained steady net addition market share of around 22%. We note that this has dropped by 300-400 bps since October 2009. This does not worry us, as the drop in revenue market share is limited for the company.

BSNL reported a sharp increase from 1.5mn in February to 2.5mn in March owing to the fiscal year end, a visible seasonality in the state-owned player. Uninor’s net additions in March dropped to 0.7mn from 1mn in February.

At the end of March-2010, India had 405 mn GSM based wireless subscribers [Data Excludes Tata and Reliance Which Report combined numbers]