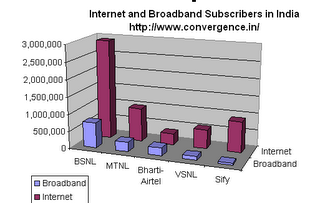 India has a population of 1 Billion of which, just 1.5 Million have broadband connection,(According to Indian Government, Internet speed greater than 256 Kbps is broadband) not even 1% of its population. In contrast, the number of cellular phone subscribers has reached a whopping 10% of its population. In the chart above, (Reproduced with permission from goBroadband) we see that the state owned PSUs have a far greater lead over private service providers. Also the top 5 players command over 90% of the broadband market in India.

This implies that the government needs to do some serious thinking about this imbalance and put a favorable broadband policy before its too late. Send in your thoughts and suggestions to the TRAI.