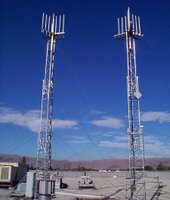 Big consumers of the fat Pipes in India, the Corporate world is unwilling to migrate to WiMax or 3G according to a survey published in the Dec issue of Voice & Data . The survey included 156 companies across various industrial verticals – Manufacturing, BFSI, Retail and IT/ITeS.

85% of all respondents still prefer Wired high bandwidth connections. 93% of the IT/ITeS companies voted for Wireline broadband. The results were similar when asked about their excitement about 3G. 87% not in favor of 3G for corporate use. Apart from pure Internet access other popularly deployd applications in the Indian market are Corp. Intranet and Voice / Video / Multimedia streaming.

Airtel Broadband and Tata VSNL together own ~50% of the corporate internet access market and both had an overall pre and post implementation score of 93 [on a scale of 100] considering issues like Network Design, Solutions Fit Assessment etc. BSNL ranked the worst with a score of 83.

Poor implementations of Wimax by Tata and Reliance for consumers maybe one of the reasons why corporates don’t want to give a shot for Wireless Internet yet. However, it is very likely that they will provide their employees with 3G broadband access to carry business on the move.