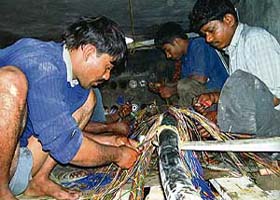 Readers of our blog are desperate to establish broadband connection in various Indian cities. I took up the matter with broadband service providers. Here is our view on the same.

Surprisingly, BSNL with its vast network is penetrating aggressively with its DataOne DSL broadband service. Visit their office 3 or 4 times, you are sure to get service and it can be rated average to above average. They are upgrading equipments at central exchanges and as on today they are the largest broadband ISP in India.

Bharti Airtel is one of the best when it comes to service. However, the company is well aware of the terrific demand and yet unable to do anything. [Recall Mittal’s statement in press few days ago ? most of the time he is competing with his hands tied at the back] When i spoke to their executive, they told about the Right of Way is a major problem in most Tier-I cities. Rapidly changing technology has also made them go slow because they are now thinking of higher capacity pipes so that they can also serve 8 Mbps broadband and IPTV. [Airtel’s IPTV project is directly under Sunil Mittal and until he signs-off, you won’t have it 🙂 ] At least in Bangalore, Airtel’s broadband availability on demand will be true by March-2008, which will cover 80% of Bangalore reaching even peripheral districts.

Their are lot of other smaller service providers such as Sify, You Telecom, etc who are our life savers now. Looks like until the end of 2008, we can’t boast of a considerable broadband subscribers base.