Non-voice as a percentage of revenue has grown from 8-9% to 14-16% for Airtel and Idea over the last 21 quarters. This, however, is lower than market expectations. 3G Data Rates across most circles in India have seen steep cuts in rates recently, still remains higher than 2G rates. Also, the pricing of good quality 3G enabled handsets remains a deterrent in the explosion of data.

Idea scores over Airtel, having increased its contribution from 12.1% to 14.5% in the last four quarters. Idea’s non-voice revenue growth had surged 11-13% sequentially in the three quarters before F1Q13 although we have seen some weakness in the last quarter due to weakening data revenue growth. 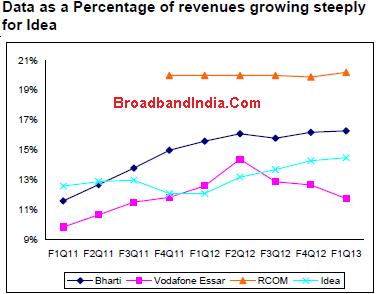 Market Expectations of 3G & Why Slow Data Revenues ?
Market expectation was far higher, especially since the 3G launch which has been across most important circles in India by December 2011. Since then 3G rates have been cut almost 7x in six months, and overall sequential data revenue growth rate for both Idea and Airtel has slowed down mainly due to a) Higher 3G data tariffs than 2G – this is the single biggest factor; and b) need for cheaper handsets. 3G tariffs are currently around 2x higher than 2G GPRS Data Packs.

And the 3G handset Factor ?
Although, the pricing of handsets remains an issue – 3G intenders surveyed suggest ~Rs8,600 as a price point for a 3G-enabled handset of their choice as against the Rs11,000 to 13,000 range available in most markets currently. What else do you think is required for 3G uptake in India ?