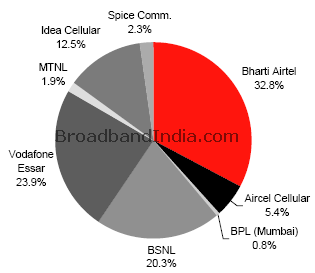 goBroadband reports that the Wireless subscriber growth in India slowed down during Sept-2007.

However, India had 149 million GSM subscribers at the end of Sept-2007. Mobile teledensity is close to 21% [includes CDMA]

Bharti Airtel is the market leader in the GSM segment with 32.8% market share followed by Vodafone India at 23.9%. Bharti Airtel, once again led the industry, with net additions of 2.06m subscribers, up marginally on MoM basis. Strong performance in Delhi, Rajasthan, Karnataka and Maharashtra led to another strong month for Bharti.

Metro circles witness 0.8m additions in spite of high penetration rates. This comes as a positive surprise to us.

Category A circles saw a fall in performance, adding 2.3m subscribers. This compares with the record net adds of 2.6m subscribers in August and 2.3m added in July.

Category B circles saw a steady month, with the addition of 2.1m subscribers in September.