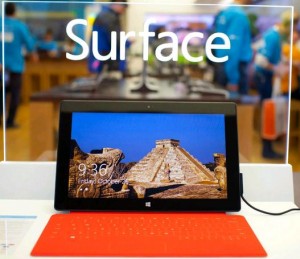 Microsoft under Steven Sinfosky is attempting to build its ecosystem of apps for the recently launched Windows 8 ecosystem. We’ll review the views of Developers across Mobile, Surface, Desktop & Server and Cloud – the Azure. This article is specifically focused on the developments in Windows 8 Mobile and Microsoft Surface Tablet Apps / Applications.

To begin with Microsoft has a Large Pool of Developers [Millions] across the Globe. For the current Windows 8 devices, Microsoft is starting at position 3 after Google’s Android and Apple’s iOS and trying to make a comeback. They finally released the Windows Phone 8 SDK. Developers are enthusiastic about the tools that Microsoft has provided to build apps. On the device side this is typically C# and Visual Studio for procedural coding and XAML for the interface, or if a web-based app this would be JavaScript and HTML5. Microsoft is transitioning away from the familiar .Net as a development platform, but has done a good job of extending this with new tools and not abandoning the past. Nonetheless, Developers emphasized that Microsoft makes their job easier and this has been a traditional strength of the company.

HTML5 does provide to run across different platform / devices and some developers will choose to write once and run anywhere. However, every advantage comes with its own shortcoming and this time it is the performance of HTML5 compared to Apps specifically developed using Tools & Technologies and Optimized for a Given Platform. As Facebook founder Mark Zuckerberg observed and noted it is important to write natively for each operating system.

Payout for Apps Developers on Microsoft Vs Apple iOS Platform
Developers retain 70% of the revenues from Apple for apps sold through the App store. With Microsoft, the economics are designed to be more favorable to the Developer Community, with 70% payout up to $25,000 and then 80% thereafter. Building an app ecosystem is likely harder on the consumer side than the enterprise side given the dominance of iOS and Android on the consumer side

Surface Devices Views There might be a learning curve associated in adopting to Surface Tablets, however, it feels awkward to go back to traditional non-touch hardware and also leave behind new apps and capabilities of the new platform that leverage the functionality of Office. The touch capabilities of Windows 8 and modern apps and SkyDrive, we think the case for an upgrade wave to new devices (either notebooks or tablets) is pretty strong for 2013. Some will go to the iPad or low-cost Android tablets. Those that require more functionality (Office) will likely prefer Windows 8-based devices.

Developers seem to agree that the Intel Clover Trail processor[ offer long battery life and have no need for a fan so can be thin and lighter weight like the ARM-based devices] is likely to be the leading Windows 8 tablet device for enterprise adoption because of full backward compatibility with Windows 7 and users can authenticate on the corporate network and apps can be deployed and managed as with a Windows 7 device.

As of now their are not many Apps, not even the popular Twitter, Facebook, ESPN, PayPal etc and will soon be coming to the platform, says Microsoft. Thus to conclude we feel that once a user is up the learning curve on Windows 8 we suspect it will be awkward to leave behind touch and the new generation of apps and features in Windows 8 to go back to their traditional desktop or notebooks. What say ?