The Indian Wireless industry continued to grow in May-2010, albeit with lesser momentum though. Wireless Connections Topped 611 mn at the end of May-2010.

This implies penetration of 52% compared with 57% in China (Mar-10). However, reported sub base for India is inflated due to higher incidence of multi-SIM ownership driven by low connection fees, intense competition and proliferation of low cost dual-SIM phones in India. Assuming 25% of Indian sub base owns two SIM cards, true wireless penetration in India is about 40%, which clearly suggests that there is room for further growth.

The following chart shows Mobile Operators Connections Market share in India at the end of May-2010. 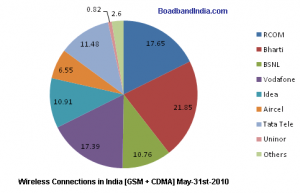 Net adds of Bharti (3.0m), RCOM (2.8m), Idea (1.4m) and Aircel (1.6m) were steady month-over-month in May. Net-adds of TTSL recovered to 2.3m (+20% mom) after falling sharply in April, while those of Vodafone and BSNL fell by 11% and 17% mom, respectively. Overall industry net-adds of 16.3m in May are 20% lower than the Mar-10 peak of 20m. We believe that despite launch of service by new entrants recently, SIM additions would continue to moderate—telcos are exercising self-restraint as subscriber acquisition costs (trade commissions) have been rising and there is growing scarcity of mobile numbering resources

Net entrants update: Videocon reported 0.7m net-adds (same as in April) mainly from its three circles (Mumbai, TN, Harayana). It is now present in six circles. Uninor reported negative net-adds, which may be due to one-off write-off of inactive subscribers. Etisalat reported a total of mere 5,000 net-adds across its 15 circles, which suggests that the company’s commercial launch is yet to take place.