According to TRAI’s report on the Telecom industry, gross revenue grew 4.1% in 4QFY11 vs. 4.9% in 3QFY11 which is a seasonally strong quarter. BSNL gained the highest (+49bps revenue share), followed by Idea (+29bps), and Tata Tele (+18bps) while
Bharti (-111bps) and RCOM (-59bps) lost share during the quarter. There could be some one-off reasons for the decline in Bharti’s revenue share. 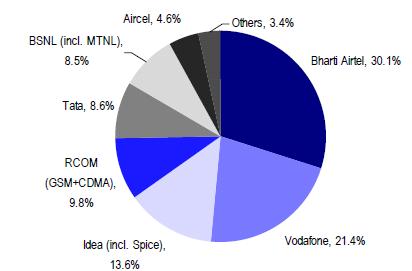 Going Forward, revenue market share, revenue growth and EBITDA margins are the key metrics in the sector rather than the number of subscribers. We believe Indian mobile sector can outperform in 2011 on the back of improving regulations. We expect NTP2011 to bring in more transparency on spectrum allocation and pricing along with facilitating consolidation.

What is the Size of the Indian Telecommunications Service [Wireless, broadband, 3G etc] Industry in 2010 ?
Based on TRAI’s Data and from Operators the Gross Revenues of all telcos was $26 Bn.