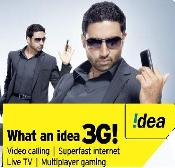 Idea Cellular, 3G Data Service provider has jumped into the fight on Cloud Based Storage making it available for FREE of Cost to its 3G Subscribers. Idea for sure has launched this innovative product much on the lines of Microsoft SkyDrive – Single Authentication and access from any device anywhere in the World.

How does the 3G Idea Cloud Service Work ?
It basically auto-installs software and the required cloud plugin on any device where you plug in the Idea 3G USB Data Card. The Dongle will cost Rs 1799 and then you will pay regular Idea 3G Tariffs for Data usage.

Why Avoid Idea 3G Dongle with Cloud Storage Solutions ?
Idea 3G wants to make money by making you frequently access its under utilized 3G network and paying them a fat bill. Now with USB Drives as cheap as Rs 300 for 8GB Storage, who would ever want to pay Rs 1799 for this Dongle [Actual BSNL 3G Dongle Costs just Rs 1000] As for as shared & collaborated documents, spreadsheets and presentations are concerned their are so many free choices Google Docs, Microsoft SkyDrive, Scribd, etc.

So we finally recommend users to just take any 3G Service that is good in areas where they use and stick to well established cloud platforms for collaborated document management.