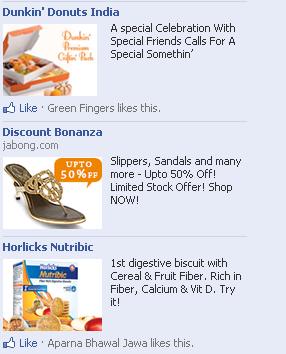 Social Networking Giant Facebook has emerged as the largest threat to Online Advertising monster, Google. Interacting with Ad Agencies we’d like to present the current state of Facebook Advertisement Platform which offers inventory for Mobile, Tablet, Desktop users and also the state of Tools and Analytics Facebook offers to Advertisers.

Facebook ads are 2 to 3 clicks removed from the point of conversion, versus pay-per-click advertising or other forms of advertising where it’s one click removed. So they’re harder to track. Someone will “Like” an ad or click on an ad and maybe “Like” your landing page on Facebook. Maybe, in the future, they will go to your site and convert in some way.

Some mobile ads require consumers to click or somehow respond. The best performing Ads aren’t necessarily defined by ad unit or ad form factors. What they’re seeing is that certain types of ads, as far as context, outperform others.

Context Ads Better than the Rest – For example, ads on tablets that are orientation-sensitive, and let you drill deeper, perform far better than ads that are not orientation-sensitive. So if you turn your tablet on its side, does the ad actually reorganize itself, and does it get clicked? They’re also seeing that just straight-up context sensitivity is a major factor. If you can put ads in front of people at the point-of-need or the point-of-interest, that sparks response rates and monetization by orders of magnitude.

You can deliver mobile ads using Facebook under circumstances where people are more likely to be using their device in a way that is more inviting to a deeper engagement, what I call “stand-up”, or “stand-up downtime”, where people are waiting in line, for example, at the airport. Those ads are going to perform better because you have a captive audience.

Facebook Mobile has 20% to 60% click-through rates on mobile, depending on the format. The CPM on mobile is an average of $1.00 or less. Facebook reported $150 million in quarterly mobile ad revenue which increased from basically zero almost a quarter ago. You can read more on the demand for Mobile Ad Units on Facebook here.

What is the Click Through and CPM for Ads Delivered to Desktop / Laptop / Tablet Consumer ?
Click-through rates on desktop, or monetization on desktop, is far, far higher. It’s 3x to 4x higher than it is for mobile. So the CPM on desktop is $3.50 all the way up to $4.00 or $5.00.

Facebook’s Analytics & Tools for AdvertisersFacebook has several problems with its Advertising platform according to Ad Agencies. We’d like to discuss about the problems with Analytics and Tools.

As far as Brand Facebook Pages, one can find out which “Likes” and which new Friends you’ve acquired through paid advertising, versus which ones you’ve acquired through unpaid, i.e. people just re-sharing your content. Now they’re showing more visibility, of course, because you can pay to promote posts on both mobile and non-mobile platforms. They have exposed the rest of their data so that you can integrate it with tools like Google Analytics and core metrics to track the entire life cycle. But they haven’t made that easy. You have to go to a third-party company, or an agency, or buy a third-party tool to really put that data together in a sensible way. That’s really off-putting when they’re up against platforms like Google and AdWords where you can basically sign in and start spending money right away.

Where are Advertisers Still Spending ? Search Vs Social vs Mobile Advertising ?
It’s still early, but as of now, Ad agencies are not seeing “social” increase within its clients’ overall budgets. That said, clients are increasing their mobile allocation within their overall social ad budgets continues taking a larger share of ad budgets, in some cases up by 30% to 40%. Mobile is different because there are so many app developers that are getting into mobile social, and using that to push and promote their own applications. I think we’ll see this segment grow exponentially over the next two or three years.