The following Chart shows Active Subscriber base for each and every Telecom Operator in India. 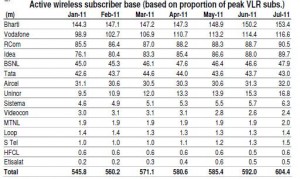 Vodafone and Idea accounted for the highest share of cumulative net addition in active subscribers (20% and 23%, respectively) over Jan-Jul’11, followed by Bharti (16%). Subscriber growth for Vodafone and Idea is driven by the entry into new circles over the last two years.