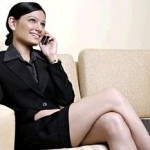 What will Reliance Gain out of Mera Pack Offer ? Back of the envelope calculations suggest that RCOM is offering 500 off-net minutes in the Rs148 pack for an incremental Rs100 over the Rs48 on-net pack. Now, if a subscriber utilizes all these 500 off-net minutes, RCOM’s termination cost at the current Rs0.2/min works out to Rs100, leaving Rs 48 for the company.

Why did Reliance Launch Mera Pack Offer ? RCOM’s “mera Pack” launches may have been spurred by Uninor’s success with such plans. Uninor has seen solid minutes and revenue growth in the past few quarters on the back of its ‘low price’ offerings, including such bucket. We would not be surprised if Uninor’s success has enticed RCOM into launching such plans. It is also plausible that Uninor’s bucket plans may have hit players like RCOM disproportionately leaving RCOM with little choice but to respond.

What is the likely Impact of Reliance Mera Pack on the Indian Mobile Industry ?
Is RCom Gaining or Losing ? With Reliance Communications ARPU / Month around Rs 100, which is way below the Rs 148 pack where the company will stand to gain at least Rs 48 in our view will help the company gain its ARPU. The second-order impact, i.e. another tariff war in the industry would hinge on the heavy users’ response to these plans.

Will Airtel, Idea and Vodafone React? These plans are clearly targeted at heavy prepaid users (RCOM has not launched such plans for the postpaid segment). Now, the incumbents would need to assess the trade-off between the risk of losing some such heavy prepaid users to RCOM versus the risk of cannibalizing revenues from such users who may not switch (for network quality or otherwise). We don’t think incumbents will react to this, however, watch the developments closely.

Do you have any opinion ? What say ?