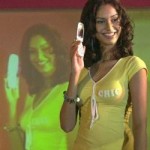 Well we believe the DoT is unlikely to accept the recommendations in entirety and hectic lobbying will happen at the office of controversial minister Spectrum Raja and PMO.