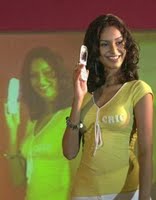 We expect RCOM to gain share from October with its new plan and net-adds for RCOM to move up.