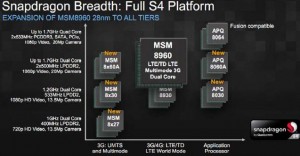 It is not just Telecom Operators who are investing in developing the LTE Networks but Network Gear Manufacturers and SmartPhone Vendors as well. One major hurdle currently for the TD-LTE ecosystem is availability of SmartPhones / Handsets. At the end of July 2012, there were more than 417 LTE devices (including smartphones, data cards, MiFi, etc ) commercially available on the market, but just 15% of those devices supported TD-LTE functions. OEMs have put higher priority on FDD-LTE handset development due to limited availability of the TD-LTE commercial network around the world.

However, developments in the last few months are encouraging. China Mobile when deployed will be the largest LTE Network in the world, announced its minimum requirements for TD-LTE handset chipsets and disclosed that there are ten chipset vendors participating in the development of TD-LTE chipsets now. Among those ten vendors, Huawei’s Balong 710 and Qualcomm’s MSM8960 have already satisfied China Mobile’s minimum chipset requirements, including the support of five standards (TD-LTE, FDD-LTE, GSM, TD-SCDMA and WCDMA) and 10 frequency bands from 800MHz to 2.6GHz.

Qualcomm announced its second TD-LTE chipset, MSM8930, which is also Qualcomm’s first multi-platform chipset that supports TD-LTE / TDSCDMA / WCDMA / CDMA / FD-LTE, but with lower processor speed than its MSM8960. Qualcomm indicated that such chipsets will be ready for customer sampling by the end of 2012 and are expected to ship in commercial devices by Q1-2013.

Japanese Softbank has indicated that it will launch six TD-LTE smartphones from Huawei, Sharp, Motorola, Fujitsu, and Kyocera in between Q4-2012 and Q1-2013.