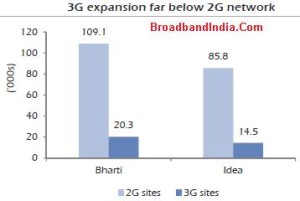 As we bid adieu to 2012, it’s almost 2 years that 3g started rolling out in India. Despite significant price correction of nearly 70%, 3G Data rates yet hover above at an average 2.5 times of 2G GPRS Data packages. This indicates that there is room for further price cuts in 3G services. The key differentiating factor between 2G and 3G is speed implying consumer’s data usage is not depended on 3G technology. While high bandwidth data usage is inconvenient on 2G, 2.5x rates differentials between 2G and 3G are too high to capture data users on 3G and monetise high asset creation in 3G.

Globally 3G penetration has been led by low price arbitration between 2G and 3G. Until data prices are aligned for both technologies, operators will find it difficult to expand 3G services at a mass level. Indian Telecom operators on the contrary are signalling increase in 2G rates to align it with 3G rates. We believe the low data penetration rates will force companies to keep data rates low for a long period to enhance subscriber base.

Coverage of 3G in India vs 2G
As evident from the Chart above, with nearly 2 years from commencement of 3G operations, telecom operators have about 16%-17% of network coverage vs 2G network, which implies that there is vast unutilized network inorder to create a base compared to 2G network. Operators have expanded network in large cities, however, it remains far below the 2G network.